You are here: Home > Freestyle Soccer: Leveraging a New Platform

(This is a guest article by Ryan Knapp) 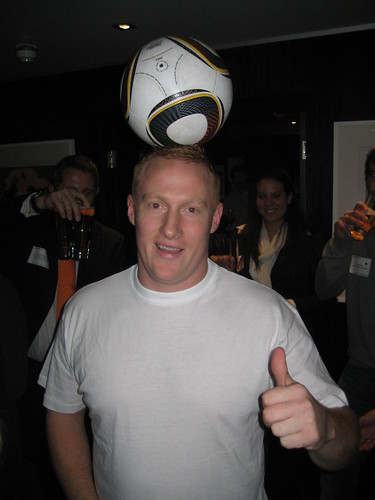 This is not Magness’s first time in the spotlight for an act of soccer jugging mastery.  In May 2009 he beat the world record for juggling a soccer ball for 24 hours without letting it touch the ground.

If you are able to watch video of Magness’ travel around London’s soccer stadiums, you can see that he is not simply juggling the ball from point A to B.  At every turn, he is interacting with fans and strangers along the route, performing tricks that go beyond a simple keep-up.  I hope a film crew or at least someone with a flip-cam was following him getting fans reaction on tape.

While sponsors are busy looking at numbers and ROI to justify sponsorship dollars, they are simultaneously searching out the next viral marketing idea or creative sponsorship activation. A freestyle soccer event such as this could generate quite the buzz surrounding your club and your sponsors.

Branding a freestyle soccer event could be approached in many different ways.  A single title sponsor might be the main backing source. There could also be multiple sponsors who divide certain parts of the route, or provide equipment and other items necessary to complete the trip.

Soccer is truly the world’s game.  Sponsorships are the highest of all sports around the world and are an important part of the game from the biggest clubs to the smallest youth academies.  Any club or organization could provide an event like this, or a spin off event. It helps create buzz and leverage your partnerships, while getting non-soccer fans interested in the game by showing off some amazing skill.

At Your Facility: Propose a contest to your supporters.  Have a day where everyone is invited to your training ground and so they can try breaking the record for keep-ups either over time or over distance. Then, award winners in several age groups and categories.  Host the event at your stadium or wherever you want supporters to gather.

On location: Another option, if your sponsor is looking for more of a presence, is to hold an event at the sponsor’s biggest location (or more accessible, depending on the need). This will draw fans right into the store where you can leverage the sponsorship and convert fans in attendance.

On their turf: Find a local soccer organization that would be willing to partner with you on the event and bring the contest to their neck of the woods.  Being accessible for those who would not be able to make it out of the neighborhood is important in connecting with fans.

What other ways could sponsors and teams leverage the freestyle soccer culture?

*Note: Dan attended the London Sports Networker Event a few days before his World Record.  Watch some of his moves at the event in this video.

Ryan Knapp is a soccer entrepreneur, passionate for using soccer as a vehicle to promote social change. He is founder of Futbolist LLC, a full service soccer company dedicated to the promotion and expansion of soccer in the United States. He is currently in training to compete in an Ironman Triathalon in 2011.  Connect with him on twitter @ryanknapp and follow the journey on ryanjknapp.com

Networking at the Ballpark
Social Media as Sponsorship Street Cred