You are here: Home > Elite Athletes are in the Hot Seat: Is the Pressure of Being a Role Model too Much?

Elite Athletes are in the Hot Seat: Is the Pressure of Being a Role Model too Much?

Written by Claire Kelly in Social Media in Sports
Comment
1 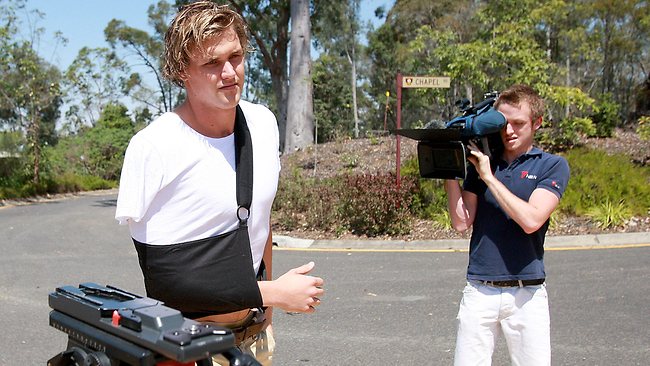 One of the biggest sports stories to hit Australia this week involved aspiring 23-year-old Olympic swimmer and elite athlete Kenrick Monk, who broke his elbow in two places and will now be out of action for at least six weeks.

Initially Monk told police he had been hit by some young (P- plate) drivers in a deliberate hit and run incident, however later it was revealed that he had in fact, fallen off a skateboard.

Monk claims that he initially made up the story about being hit by a car because he was embarrassed about telling the truth.  He is also quoted as saying that he wasn’t supposed to be involved in dangerous or high impact sports (so hence he made up the initial story to stay out of trouble).

The accident is a serious interruption to his pre-games preparation but the bigger question is whether his lie will affect his chances of being selected by Swimming Australia – if he is successful in the Olympic trials.  Sadly, even if he is successful, if he is deemed as bringing the sport into disrepute they could refuse to give him a spot on the Olympic team.

Swimming Australia has dealt with its share of controversy in the past to protect its reputation (in fact swimmer Nick D’Arcy was previously ruled out of competition contention after a nasty incident).

But what I find particularly disconcerting about this story is not the fact that Monk lied, or that he could be out of Olympic contention later, it is the fact that he felt like he had to lie.

Because if he told the truth he obviously felt he really would be out of consideration, period.  Yes, he was out of integrity and it was a stupid thing to do, but does that mean he should be resigned to a life outside the pool because he made one bad choice?

What does it say about Western society that an elite athlete feels his whole career could be jeopardized simply by telling the truth?

Surely it is up to us to create an environment where our athletes feel safe and nurtured, where they can be open and honest about their feelings without fear of retribution.

It’s a lot of pressure for any athlete to think that they might not be able to continue on with their career because of one silly mistake.

We seem to forget elite athletes are normal people (albeit some of them doing extraordinary things). And normal people, of course, make mistakes on occasion.  Yes, elite athletes might live a more seemingly glamourous or passionate life than most of us but that doesn’t mean we have to be so unforgiving when they fail to live up to our standards.

Monk isn’t the only elite athlete, and won’t be the last, to fall from grace. Tiger Woods, Ben Cousins, Shane Warne, John McEnroe, Serena Williams – all of these super-talented athletes have made ‘mistakes’ or done outrageous things in their time.  They have challenged and upset others’ values.  And you know what?  Even if we don’t agree with their methods, we still love them.  As despite all of their perceived flaws and outbursts, we recognise each and every one of these athletes gave (or still gives it) their all and has contributed to their sport in a way no other athlete could have.

The fact is despite being super talented, and super- successful, elite athletes are all still human.

Even one of my all-time favourite athletes – Roger Federer – loses on occasion and when he does, it reminds me that we are all fallible.

Mistakes are inextricably linked to growth – without them we simply wouldn’t know what it was we needed to improve.  Let’s just hope that Monk learns from this one.

3 Ways to Attack Your Sports Career
Post-Career Athletes and Money: How Athletes Can Protect Themselves from Financial Ruin

One Response to Elite Athletes are in the Hot Seat: Is the Pressure of Being a Role Model too Much?