You are here: Home > Why You Don’t Have To Be Marv Albert To Become A Sportscaster If your dream is to become a Sportscaster, the first thing you think of might be anchoring ESPN SportsCenter on national television, doing play-by-play for Monday Night Football or covering the Olympics for NBC.

Unfortunately, there are only so many of these jobs available. And, in many cases, the Sportscasters that hold these positions usually keep them for a long time!

There are many great sports broadcasters that have had long successful careers but have never achieved the superstar status like those mentioned above. So, if you aspire to be a Sportscaster, you might need to consider other unique positions that will help you make a name for yourself in the sports broadcasting industry.

Below are 3 Sportscasters that you might not have heard of, but each of them have made a career out of being versatile, consistent and unique in their field. If you are a fan of poker, you know the voice of long time ESPN broadcaster Lon McEachern. He is the current voice of ESPN’s World Series of Poker broadcasts as well as their WSOP Europe coverage. Since 2003, any major poker tournaments that have been televised on ESPN has featured his signature voice and professional play-by-play delivery.

McEachern is a graduate of the University of California Santa Barbara with a degree in communications. Prior to joining ESPN in 1994, he worked many atypical sporting events including the Tour de France, Mixed Martial Arts, inline skating and more. After joining ESPN, he continued using his multi-faceted talents calling everything from World Cup Skiing to K-1 Kickboxing, and even the X-Games.

However, once poker exploded in 2003, MacEachern’s professional style and clear enthusiasm for the game of poker won over fans and helped to make ESPN’s World Series of poker broadcasts among their highest rated programs. Alongside Norman Chad, McEachern is now approaching a decade calling the action from the felt. 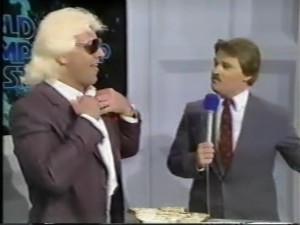 Tony Schiavone is very likely one of the most underrated broadcasters in the history of sports for one simple reason.

The majority of Schiavone’s career was spent as a lead announcer and interviewer for the now defunct World Championship Wrestling. Many now know him as either the play-by-play man for the Gwinnett Braves, the Atlanta Braves AAA organization, or for his post show on the Georgia Bulldogs Radio Network with David Greene.

Schiavone graduated from James Madison University in the late 70’s and from there began work as a minor-league baseball broadcaster, mostly with the Charlotte O’s. The team was partially owned by Jim Crockett, Jr of Jim Crocket Promotions, a regional wrestling organization in the south.

Schiavone started out as a broadcaster with the company and as the company grew to become the National Wrestling Alliance and later World Championship Wrestling, Schiavone was known as the voice of the company on television. He did leave the company in 1989 for the World Wrestling Federation, now known as the WWE, but returned to WCW in 1990 and remained there until the company was purchased by the WWE in 2001.

After leaving wrestling, he returned to regular sports broadcaster and served stints as WDUN in Gainsville and WSB-AM in Atlanta. He has also served as a writer for the Georgia Bulldogs Radio Network. He also is a producer for Best of the Bulldogs and even won an AP Award in 2004 for Best Sports Program. He began work with the Gwinnett Braves as their play-by-play man in 2009 and is the current voice for the club’s broadcasts. If you are a fan of MMA, you know Mike Goldberg. Otherwise, odds are you may have heard his voice but have never put a face with it. Goldberg has been involved in sports broadcasting since the late 1980 with some remembering him as the play-by-play announcer for the Detroit Red Wings and for hockey on ESPN2.

Many younger fans would only recognize Goldberg from one arena, the UFC. He began work with the UFC back in 1997 and has been the lead play-by-play man for UFC pay-per-views as well as Spike TV’s UFC Unleashed. During that time, his signature voice and immense knowledge of the product has impressed both casual and hardcore fans of the sport alike.

Goldberg has also shown immense loyalty to the UFC product, having received and offer in 2005 to leave the company and join World Wrestling Entertainment as a head announcer. He was even offered a six-figure bonus to join the company, but Goldberg instead chose to stay with the UFC.

Some of Goldberg’s other exploits include calling Arizona Cardinal games on the team’s flagship radio network. As the UFC is growing, Goldberg is beginning to grow a following, but he is still relatively unknown compared to broadcasters in other sports.

Do You Aspire To Become A Sportscaster?

The above announcers have all had long and successful careers in the sports broadcasting industry. Now, they might not be as popular as Bob Costas and they might not be the first ones that come to mind when you think of an “iconic” Sportscaster. But, they are among the best at what they do and they have carved out a pretty good career doing something they love every day!

Do you aspire to become a Sportscaster?  Have you ever considered taking a different path in sports?  Let us know in the comments below or send us a tweet to @sportsnetworker.