Texas Motor Speedway goes big with a new video board It’s no secret that live sporting events are fighting the “at-home” experience to maintain ticket sales.  It appears that not even NASCAR is immune to the dilemma.  It also appears, by popular opinion, that everything is bigger in Texas.  Texas Motor Speedway is about to prove that with their new 20,666.64 square feet, 1080p HD video board.

That’s right, the new video board is set to be the world’s largest.  It will stand at 218 feet wide by 94½ feet tall and will be 79% larger than the video board at the Cowboy’s AT&T Stadium.  The resolution number may be even more astonishing:  4.8 million pixels that can display 281 trillion colors.

“All stadiums are trying to do battle with guaranteeing our fans aren’t going to miss a thing.  Fans won’t miss a replay or a pit stop. We’re trying to get them off their couch and see, smell, taste and experience great racing. Big screens are affordable, and home theaters are comfortable but there’s nothing that compares to attending any event live.”

With seven of the world’s 50 largest HD video boards, Texas seems to have a clear plan for fighting falling attendance rates.  Texas Motor Speedway is about to add another to that list, which should put the state at eight.  Either way, the new board will surely enhance the live viewing experience, but will be an adversary to the couch?  NASCAR will find out in March. Sports teams love to control ticket prices in order to maximize revenue.  Because of this, secondary ticket resellers are a bit of an annoyance.  Luckily for the sports organizations, SeatAdvisor is here to help.

SeatAdvisor has recently launched TicketResell, which helps put teams back in control of ticket resales.  Typically, when a fan needs to bail on their tickets at the last second, they head to a secondary ticket reseller.  These companies are often able to then sell those tickets at less than face value.  Sports teams tend to despise this.  Thus, TicketResell removes “middlemen” from the equation.

This system appeals to fans by providing them with a secure avenue of getting rid of their tickets at the last second.  These fans simply create an account with the venue where the tickets were originally purchased from.  The team essentially sets a resell price and the deal is done.  A great feature of the new system is the social media aspect of it.  Fans that have posted the tickets for sale can then promote them on their social media sites.  This allows friends and family to be notified of the availability of the tickets. Brandon Hanke, SeatAdvisor VP of business development, recently told Pollstar:

The power of ticket sales has come full circle. It is inevitable that fans watching any sport will take to social media to weigh in on all the action.  NASCAR appears to by figuring out the secrets of the social media world with their new fan and media engagement center.

The FMEC, as it is called, is comprised of 13 47-inch hi-definition monitors that can be configured via touchscreen technology.  The system is ideal for sifting through social media interactions to find the voice of NASCAR in the cyber world.  The software needed to take on this task was built by Hewlett Packard.

It is believed that such a system could be utilized to attract potential sponsors and other media partners.  By monitoring tweets and Facebook posts, NASCAR can better understand and evaluate the potential ROI a sponsor could receive.  Chief marketing officer Steve Phelps explained:

“This platform allows us to understand the conversations happening and the entire industry to get the information and react to it.  If it’s new sponsors, we’ll know how much the media is picking them up, or if the fans recognized it or understood it. It allows real-time analytics for race teams, sponsors and tracks.”

NASCAR’s fan and media engagement center has been designed to delve deep into the social media world.  Of course the system allows for typical searches of drivers or the hashtag #NASCAR.  But going further, it also incorporates searches for driver nicknames, drivers not on social media, and altered sponsor names.  Searching for NASCAR tweets based on follower counts is another relative parameter of the FMEC.

NASCAR is certainly at the forefront of the social media arena.  The FMEC just furthers that statement. 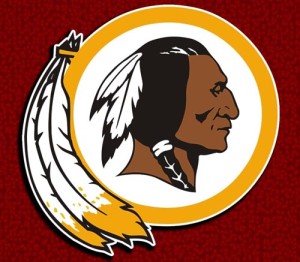 The issue of the Redskins’ name being offensive seems to be a recurring topic of debate.  Dan Snyder – Washington Redskins owner – has thus far stood by his team’s name.  But if the issue attracts any more attention, the business may be forced to rebrand.

The Oneida Indian Nation has created a radio campaign as well as a website exclaiming that it’s “simply wrong to use the offensive term ‘Redskins’ to sell anything, much less an NFL team.”  The team has also come under fire after 10 members of Congress sent letters to Mr. Snyder, Mr. Goodell and FedEx CEO Fred Smith urging a name change in late May.

Roger Goodell – the NFL’s Commissioner – stated:  “If one person is offended, then we have to listen.”

The majority of American’s seem to back the team’s decision to remain the Redskins.  A FedEx spokeswoman also explained:

“We understand that there is a difference of opinion on this issue.  Nevertheless, we believe that our sponsorship of FedEx Field continues to be in the best interests of FedEx and its stockholders.”

Either way, a rebrand for the team would likely cost between $10 million and $15 million.  The major cost would not be on the creative side of the rebrand either, but stem from the material side of such a change.

Whether or not the change occurs remains to be seen.  At this point though, it’s looking more and more likely that the team will have to make a vested business decision. In 2012, the sport industry in the United States alone was valued at $435 billion, according to the Center for Sports Business & Research at Penn State.  With an industry that is constantly changing, it’s important for sports marketers to stay up to date on the landscape.  “The Subject Of Sports” aims to do just that.

“The Subject Of Sports” is an open class held by Syracuse University’s Professor Burton.  The class is virtual and will run for six weeks starting October 14.  It’s a non-credit course that is free for anyone interested.

Professor Burton teaches in the Falk College’s Department of Sport Management, which offers undergraduate and graduate professional degrees in sport management. An award-winning teacher at SU, he was recognized for teaching excellence in 2011 and 2013.  Falk College Dean Diane Lyden Murphy explained:

“We are pleased to share our knowledge and perspectives in the field of sport with a wider community.  The MOOC offers a great opportunity for others to hear Rick’s insights and experiences first hand. He is both well-versed and well-respected in the international sport community, and has a passion for the subject matter that consistently engages and inspires our students.”

With the course being free and open, enrollment is easy and open to everyone.  The only requirement is a computer and an internet connection.

You can sign up here and read more here.

HGH In The NBA: Is It An Issue?
How A Sports Management Degree Can Help Your Sports Career