You are here: Home > The Future of Olympic Basketball Pros and Cons

The Future of Olympic Basketball Pros and Cons Is this the last time we will see a USA “Dream Team” in the Olympics?

As the USA Men’s Basketball team continues its quest for the Gold Medal (at my time of writing this they were scooting into a semi finals matchup with Manu, Scola, and the gang) WIN or LOSE one thing is for certain:

This may be the last Olympic Basketball Dream Team we ever see!

After the Olympics end there will be a hotly contested debate over whether or not to continue having our USA Professional players be the ones to represent our country.  They are considering, and my opinion is they will, move to an 18-23 year old amateur team for the 2016 games. I am not here to debate whether or not it should happen but what the PROS and CONS of it are.

Taking out the USA 2004 Flameout (look at Amare’s face!) Bronze Medal Finish and that 6th place finish in the World’s prior to that the USA Men’s Basketball Team has completely dominated international basketball since the original Dream Team was incepted in 1992.  Going to an 18-23 year old team will still make us the heavy-favorites most years, but by no means will we be blowing people out of the water.  If you are a hoops junkie and want great competition from top to bottom then you will go for this.

Young amateur guys with the talent of an Anthony Davis or Michael Kidd Gilchrist would be back on this team in 2016 and about 10 other studs that will/are either coming into college as freshman at Kentucky this year or will be emerging as studs in the next year or two in high school.  It will give us a chance to develop young talent on a global scale and give the NBA an imprint of a fresh new face every four years across the globe! 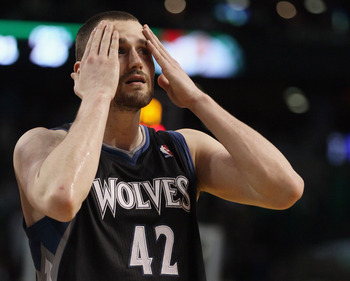 3) Spreading the LOVE (not Kevin’s)

Every four years a new crop of young talented Americans will get the chance at Olympic Gold and the opportunity to represent our country.  The love and wealth would be spread and more players would have the chance to achieve this incredible dream.  Most Olympic athletes only get one shot at one Olympic Games.  Michael Phelps, Kobe Bryant, etc are anomalies rather than the norm.

4) The World Cup of Basketball!

This is the main reason behind why the NBA and the Crazy General, ahem Mr Stern, are pushing the USOC to go to an amateur only team.  The growing global popularity of the NBA has grown into the idea that we could have a “World Cup” of basketball with the all of the pros competing just like in Soccer!  Technically speaking then we would still get to see Chris Paul line up with the Durantula, The Black Mamba, and whoever else wants to go at it in the First World Cup Of Hoops.  And the best part about this is: we wouldn’t miss any games due to Bob Costas monologues or handball (no offense to handball but I’d rather watch Carmelo and Westbrook ball!).  For about two weeks just like soccer every four years it would be all basketball all the time.  From a business perspective too, and a sponsor standpoint, this idea makes a lot of sense.

1) We should always put our best foot forward

I believe in life you should always put your best foot forward and put your best team available out there to win at an event when you are past the 8th grade.  If Kobe and Lebron is the answer in 2020 still both in their 30s and 40s respectively then so be it!  Let them go grab that gold for the good old U S of A!  We should field our best team and if we aren’t doing that then we are doing a disservice both to ourselves and the spirit of the Olympics and of competition.  Soccer does it now and it makes soccer during the Olympics much less watchable.

2) It really is because of money

The real reason this is even being considered is for one reason and one reason only: MONEY!  Stern and the gang of International Owners could stand to make a lot of money with an implementation of their own World Cup.  And that is only happening for the USA (the most important piece to the puzzle) if we go to an all amateur US squad in the Olympics.  We should never do things in life I feel solely for the gain of more money and more power and I think that is what’s really at play here!

4) The biggest names in the Olympics will be taken out of it.

They are the biggest and best stars in all of the Olympics along with Michael Phelps and Misti May and Kerri Walsh.  Take these guys out and you are looking at declines in sponsorships, revenue, viewership, and ratings.  That is bad for business for the Olympics and I don’t think they want to see it happen.

Overall this decision, whichever way they go, will have a huge impact both financially and culturally from a national perspective in our country and from a global standpoint.  Right now it is very clear that no one can mess with us in Olympic Basketball minus a blip or two on the radar.  The same won’t be able to be said anymore if we switch from Pros to Amateurs.

Here’s to making a fast and quick decision! (Something tells me that dream is far fetched.)

Thanks for reading everyone!  What are your thoughts?  Amateur or Pro?  Why or Why Not?  Leave us your comments on here and we will debate or tweet us and let us know!  Have a great day!

One Response to The Future of Olympic Basketball Pros and Cons