You are here: Home > Top 8 Most Engaging NFL Players on Facebook

Jon Schulman joined BDA Sports Management in September of 2008. At BDA, Jon’s responsibilities include implementing so…

Written by Jon Schulman in Social Media in Sports
Comment
8 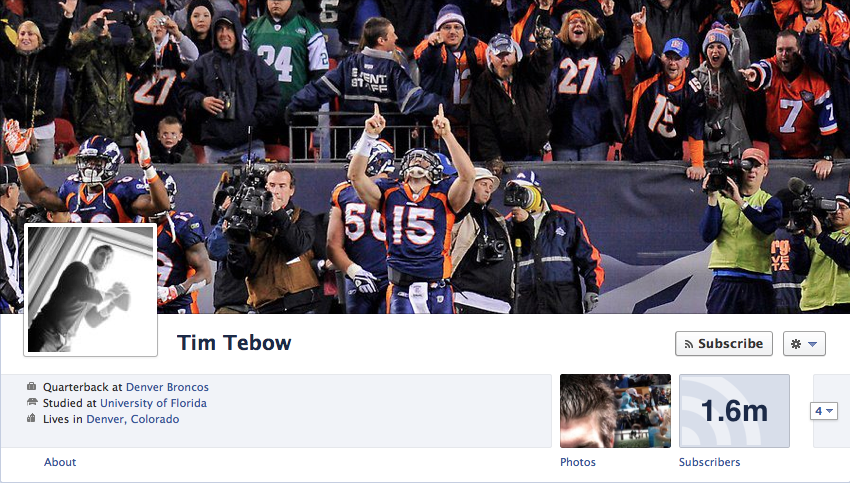 Several different qualifications are needed to be crowned as the King of the NFL Facebook Pages and overall number of “likes” does not guarantee you a spot on the most engaging NFL players on Facebook list. In order to be the NFL Facebook master, one must entertain and amuse, while engaging with their fans, providing insightful opinions and being the source of inside information. Energy is required and displaying a lighter side is desired.

Social media is where the most loyal and passionate fans come to connect with their favorite athletes. It is a platform for athletes to build their fan base, while rewarding them at the same time. Facebook is a perfect way for athletes to be more influential than ever and connect with millions of fans worldwide. The following ten NFL figures are at the top of the mountain: Known for his popularity on Twitter, OchoCinco has also become proficient on Facebook. No one can accuse Chad of not being candid. He expresses himself as openly as can be on a daily basis, but also challenges his fans to think. He is cutting edge with what is new and in vogue. He covers all bases, whether it be speaking Spanish to his subscribers, telling jokes he heard on the street or inviting random fans to attend the next Patriots game on him. Like him or not for his on the field antics, OchoCinco is a storyteller and an innovator when it comes to social media and his near two million facebook subscribers tell quite a tale. He may be recognized as one of the most feared defenders in the league, but Polamalu is a gentle giant and his compassion comes through clearly on his 2 million+ subscribed Facebook page, the most in the NFL. He shares with his subscribers on a weekly basis, whether through inspirational stories or offers for free tickets, autographs or even a chance to ride a limo with him to a charity event. Polamalu never fails to update his following and he knows that consistency is important. He displays it on the field and on his Facebook fan page. A picture is worth a thousand words and Larry Fitzgerald has a lot of them. It is almost impossible to not know what Larry is up to on a daily basis, because he keeps his fans involved and makes each of them ultimate insiders. From his intimate training videos on his “Team Fitzgerald TV” tab to a Fiesta Bowl visit with Condoleezza Rice to a sneak peak of his upcoming Nike commercial, Fitzgerald has put his fans in the know. Fitzgerald preaches faith, focus and finish, but when it comes to his fan page, he also exhibits energy and candidness.

Encouraging your fans to contribute and rewarding them for being a part of your community is essential to any successful facebook fan page. That’s why it comes to no surprise that Rice joins the cream of the crop of NFL fan pages to go along with his half a million likes. Rice recently held a kids “coloring contest” and shared every single drawing he received on his fan page. The winner received their drawing back in the mail signed by Ray himself. Ray recognizes that it is all about the fans and they will have fun if you are having fun with them.

Jennings asks his fans to “be great” on a daily basis, something he strives for on the football field along with his facebook page. His enthusiasm and spirit is showcased to his large following with exclusive content such as family home videos, celebrity sightings and pictures with Packers fans all over the globe.  Jennings is insightful when it comes to hard-hitting topics, but is also not afraid to show a lighter side to sports. Tim Tebow’s facebook page takes us on a journey. Through his timeline, Tebow offers his fans a very organized look at his excursions with lots of content and updates for followers worldwide. His page shows that he cares about his fans. The majority of pictures are Tebow with his fans, not Tebow standing next to his Range Rover or new swimming pool. From pictures to his mission to the Philippines to a fan he took to Disneyworld, Tebow shows interaction and a level of engagement that he is willing to share with his subscribers. A leader on the turf, Brees is also a leader on the NFL Facebook fan page list. The quarterback is very deep when it comes to his following. Brees offers messages to his fans about his newborn baby and key issues surrounding the NFL. He is engaging with his community and recognizes the support of the “Who Dat” nation. Brees is consistent when it comes to rewarding the nation as well. Tickets to games, giveaway items and shout outs to local struggling restaurants are all part of Brees’ arsenal.

Hines Ward’s energy doesn’t stop when the game clock strikes zeros. Ward takes that energy and pumps it out to his Facebook following. Ward loves his fans and it shows. Lots of behind the scenes pictures with fans, teammates and family members are the keys to Ward’s Facebook success. Hines always keeps engagement high by wanting to know his fans opinions, whether it be their predictions on games or their thoughts on his Dancing With the Stars win.

8 Responses to Top 8 Most Engaging NFL Players on Facebook